View Tour Dates
Toronto based garage punk psych rockers, Wine Lips hit the stage for the first time in the fall of 2015. Initially a part time project between songwriter/guitar player, Cam Hilborn and drummer Aurora Evans, the band began playing clubs in Toronto, stretching organically to surrounding cities, and then into Quebec. By mid 2017 it was clear that the band members were ready to make a full-time commitment. Wine Lips released their self-titled debut LP on indie label Fried Records and set out on their first 5-province tour east to the Maritimes. And they haven’t looked back since.
A chance meeting resulted in an April 2018 tour of Hong Kong and China, where they were received by enthusiastic audiences.

Never ones to let the dust settle, the band released their follow up LP “Stressor” in March 2019 and toured North America relentlessly until early 2020. The release of Stressor along with endless tour dates earned the band an ardent following and saw some of the album tracks featured prominently on television and Netflix.

The band spent most of their free time in 2020 writing and recording their phenomenal third full length record “Mushroom Death Sex Bummer Party” at The Sugar Shack in London, Ontario with Simon Larochette.

“The record is crazy! We really spent a lot of time getting the songs to sound exactly the way we wanted. I think this is the best stuff we’ve recorded and I’m super stoked with the end result!” says Cam

“This new song is a garage-punk sugar rush.” – Brooklyn Vegan

"It's pure adrenaline, it's noise, it's intense, it's refreshing, and it feels life-giving. The garage-psych band's new album is, for all intents and purposes, pretty fucking crazy." - Exclaim!

“The song—off the upcoming full-length Mushroom Death Sex Bummer Party—is double-time, turbo-snotty garage rock slimed in gloriously vintage reverb. And, if possible, the video is even greater—a testimony to the power of setting up in a room, turning on the cameras, and then having at ’er.” – Georgia Strait
Contact
Press
Stomp Records
Mike Magee: mike@stomprecords.com
Booking (CAN)
Stomp Booking & Spectacles
Alex Giguere: alex@stomprecords.com
Lora McLaughlin: lora@stomprecords.com
Booking (EUROPE)
Ya Ya Yeah Music
Jonas: jonas@yayayeahmusic.pt 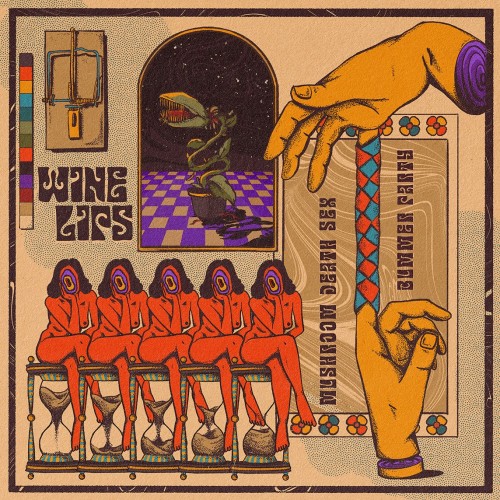