Starting with a self released album in 2000, The Sainte Catherines went on to work with Yoyo Records (Germany) and the Canadian label Dare To Care before moving up the ladder to corporate powerhouses Eyeball and then Fat Wreck Chords. What am I saying here? The emo kids like 'em, the punk kids like 'em. No one quite knows what to do with them because they've got three meaty guitars, a front man that exists at that elusive vortex where Hank Von Helvelte, Chuck Ragan and the bar where Cirque du Soleil clowns go to get drunk all converge…and they all have haircuts that would scare the shit out of almost any mom.

Look, I said these dudes came from a crazy spot, right? Okay, well The Sainte Catherines, not to be outdone, recorded their album in a country chalet, all by themselves with no engineer at all. Now, as we all know, this is either the recipe for disaster or brilliance, and which one do you think I'm gonna say Fire Works is? Come on. This record takes its cues from the band's early influences like American Steel, the Broadways, Jawbreaker and Fifteen, and strains it through a sieve of 70's rock, like a French Canadian wine that will kick your dick off, get you drunk, eat all your poutine and find you hung-over in the morning humming the most melodic and positive tunes of the bands storied career. Did I mention that these dudes fought a whole city with Against Me!? Well, I don't like to name drop, so take my word for it or ask them all about it when they come through your town.

Yes, expect exhaustive touring from The Sainte Catherines for the Fire Works cycle. They're loved in Europe, Canada and the stinkiest most festering pits in all of the US so get out your moustache, cut your bangs at a weird angle and give me a "Tabarnak!" for The Sainte Catherines. Um...also, they've got funny names and they're not above wearing vests. Did I mention that? Okay. I think we're done here. - Brendan Kelly of Lawrence Arms 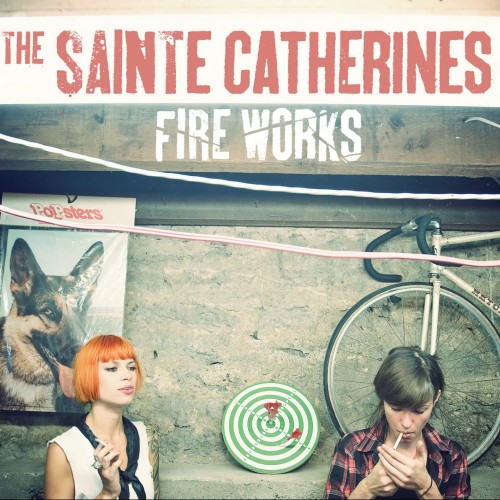