View Tour Dates
Now based in Montreal, The Peelers were formed in 1999 in North Glengarry. Less than an hour from the city, they immersed themselves in a hotbed of Gaelic culture which smashed head-on into a love of whiskey, poetry, footy, debauchery, ska and punk. The band has evolved to become one of the most acclaimed Celtic punk acts in the genre. They don’t just bend the rules of tradition with their blend of aggro & trad Irish - these long ball merchants tear it to pieces.

Early 2021 saw the first release on the Stomp label, entitled ‘Down and Out in the City of Saints’. 10 songs, recorded in Montreal, Dundee Scotland, and Vancouver between December 2019 and June 2020, and mastered for vinyl at Le Lab Montreal. In keeping with their more recent material, Dave Barton’s songs reflect the North American experience of the diaspora with a tip of the newsboy cap to the Quebecois narrative and the lure of Boston and New York; blending truth and fiction, glory and sport, love and loss, darkness and despair, while introducing composites of individuals, companions, friends and foes met along the punk rock journey. There’s even a track dedicated to Irish middleweight professional boxer, ‘Spike’ O’Sullivan. The album features several key guest appearances: friend of the band, ‘Gleadhraich’ Scottish bagpiper Craig Weir, who’s performed with Queen, The Kaiser Chiefs, and The Libertines amongst others. Dan Garrison of Van City’s The Corps, ex Real McKenzie, takes a couple of verses on the opening track. Montreal stalwart Sean ‘Riot’ Ryan of The Mahones/ Irish Nails lends his vocal stylings, as well as banjo and mandolin from Kevin McNeilly and Ewen McIntosh respectively.

Now in 2022, The Peelers are gearing up to release a new album and will be bringing their wild live show to stages across the USA!

What the community has said:

"With Down and Out in the City of Saints The Peelers have once again lived up to their reputation as quality purveyors of Irish-punk...As is clear from beginning to end, Barton is a poet in a punk band, offering more than just stadium filling choruses, providing both substance and purpose in each word..." Cole Faulkner ThePunkSite 2022

"Palace Of The Fiend, the 2017 release by The Peelers was an absolute masterpiece, one of the best Celtic-punk albums ever made....Down and Out in the City of Saints: The best band in the whole Celtic-punk universe and another great album." - Shite n Onions 2022

“This is Celtic-punk at it’s very, very best, fast, powerful, raw, the poetry of those who have really lived – part Pogues...and part Behan." - Shite n Onions 2017

“...The Peelers are a living legend. The heavyweights of the genre are back with their new albums. Will they be able to meet the fans’ expectations? The Peelers have already done it.” - Celtic-Folk- Punk Germany 2017

“Celtic Punk royalty, The Peelers keep carrying on. There are many great Celtic punk and rock bands in the U.S., from the Dropkick Murphys to Flogging Molly to Black 47. There’s no shortage of Irish punk in Canada too, and one could easily argue that The Peelers have been leading that charge.” - Sean Kelly, Connect Savannah, Georgia March 2019

“...like they say ‘good things come to those who wait’. For me this album is one of the best releases of 2017 and there has been some cracking albums released this year...I’d highly recommend ‘Palace of The Fiend’ to anyone who likes their Irish music with a twist of punk.” - Shane, London UK Celtic Punks Webzine 2017

“Most Celtic punk albums are steeped in tradition and culture. And this is no exception. But, “Palace of The Fiend” adds more passion to the storytelling than most Celtic punk bands.... when the band plays songs like “A1A FLA”, I see a circle pit erupting, with legs and arms and bodies flying everywhere. In other words, this album offers every spectrum of a raucous live show. And that’s what makes this record outstanding. Palace of the Fiend is one of my favorite releases of the past year or so. Every song provides somewhat of a unique peek into a storied history and culture with great lyrics, excellent vocal delivery, and boisterous musicianship. And after listening to this album, I can’t wait to see The Peelers live!” - Peter Vincelli, Paddyrock U.S. webzine, September 2018 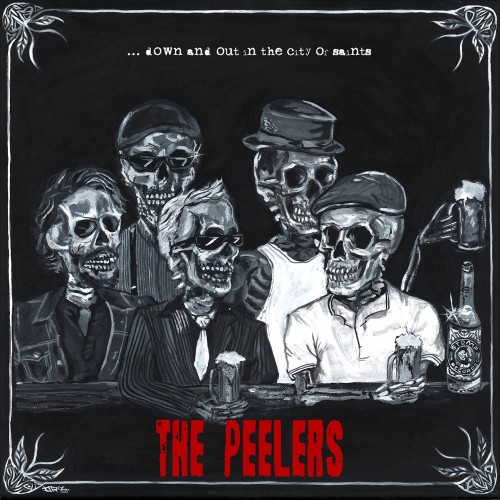