View Tour Dates
Born from the ashes of the Quebec farmhouse they accidentally burned down in 2012, Morgan is a five-piece posse of misfits that mixes punk, country and Irish drinking songs with chainsaws. For real. Their catchy songs and barber shop harmonies will make everything that's going bad in your life just a teeny tiny bit better. One of the perks of Morgan's music is that it tends to make your mouth run dry real quick. So quickly in fact, you should just go get yourself a beer right now while reading this stupid bio and get it over with.

After the tragic fire in their beloved farm in 2012, Morgan became homeless and broke. Fuck. They needed to find a way to get the wheels back on the wagon and quick. After doing a little research, they found out that the easiest way to make loads of money was to play music, specifically punk rock music, because that is (of course) where all the money is. They took an old washboard from the farm, dusted off the chainsaw and picked up a couple of busted instruments from the local pawnshop and started writing some tunes. Two weeks later, they won the Musique Plus house band competition… which they never really signed up for. That same year, they unintentionally released their first album: Get A Horse. They sold thousands of copies, made a shit load of money and rebuilt their magnificent farmhouse and lived happily ever after… the end.

Well, they say lightning never strikes twice.....but it sure did in the summer of 2016 when their newly built barn burnt down once again. Shit fuck. What started as a small bush fire quickly escalated and destroyed their new home. They found out the hard way that fighting fire with some more fire isn't always the answer. Broke and homeless once again, Morgan knew exactly what to do.

Their much-anticipated album entitled Morgan Deli is set to come out Fall 2017 on the delicious Stomp Records, featuring 12 mouthwatering songs that are sure to whet your appetite and whatever else needs whetting.

Over the years, Morgan had the pleasure to share the stage with a bunch of swell folks such as: Mad Caddies, Less than Jake, Planet Smashers, The Creepshow, Grimskunk, Mass Hysteria, Tagada Jones, The Mahones, The Flatliners, Quebec Redneck Bluegrass Project, Bernard Adamus, Les Dales Hawerchuck, The Dreadnoughts, The Brains and many more.

Sooo whether you're having a casual cold one with your buds or if you're freebasing speedballs on the highway running from the cops, Morgan is sure to put everything right where it should be.

"Morgan Deli’s off kilter humour and catchy rural attitude clearly frame Morgan as a frontrunner in the country/folk/cow punk scene. There’s never been a better time to step through the doors of the Morgan Deli. Now where’d I put that glass of porcupine chilli bean gasoline water?" - The Punksite 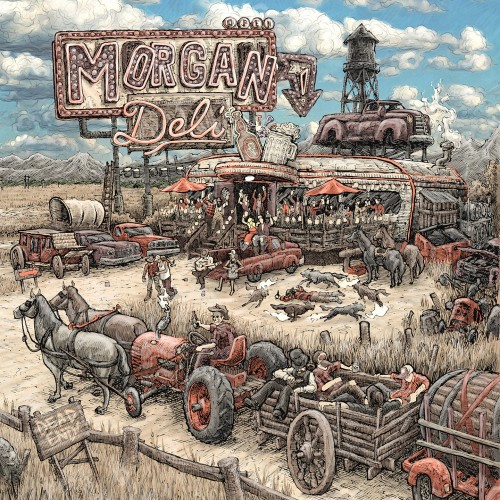