Brutal Youth is what you'd get if a runaway train packed full of explosives made love to Tony the Tiger. These Weird Al aficionados play manic, 120 second, punk rock anthems peppered with sucker-punch hooks that'll leave you toothless before you even know what hit you.

Energetic, raw, honest, heart on sleeve punk rock, Brutal Youth have been causing a ruckus for the last 6+ years. Formed in 2010, the band hit the ground running and recorded their first brutally fantastic album, "Spill Your Guts". Shortly thereafter the group uprooted themselves from their hometown of St. John's, NL and moved to Toronto. After settling in to their new digs, Brutal Youth gained attention locally with their lightning-fast sets and blood-soaked high-intensity performances. Fast forward 6 months and we find them on the road travelling across Canada, as well as playing shows across the U.S. In a flurry of songwriting the band recorded a split 10" with Montreal locals Tightrope, which was released in Feb 2012 (My Fingers! My Brain! Records). Never content to rest, Brutal Youth headed back into the studio once again in Oct 2012 to record their sophomore album "Stay Honest" which dropped April 2013 coupled with a celebratory tour.

With the success of Stay Honest, Brutal Youth began once again writing and recording between clusters of shows and came up with the 7" "Bottoming Out" (Paper+Plastic 2015) paired with a month of tourdates across Europe before once more stepping into the studio to record their 3rd full length album "Sanguine" set to be released through Stomp Records. More touring saw the band head overseas once more for a second tour of Europe followed by a homecoming where they were invited to play Pouzzafest with NYHC giants Sick Of It All and the inaugural Asbury Park edition of the Punk Rock Bowling festival. They've shared the stage with Descendents, Cock Sparrer, The Ste Catherines, The Creepshow, Off With Their Heads and the new album is mastered by the famed Mass Giorgini (Rise Against, Anti Flag, Alkaline Trio). With the imminent release of "Sanguine", Brutal Youth have become an unstoppable juggernaut of explosive face-smashery set to level the musical landscape.

Brutal Youth is like a gun, just point them at whatever needs to be destroyed.

"It's too easy to write them off as a fun' band, undeserving of deep analysis; but a cursory look at their lyrics reveal Brutal Youth to be assured and vibrant with a knack for poetic introspection." – Dying Scene

"Brutal Youth continue their well honed blend of pop-punk and more hardcore elements, and now, maybe I'm just making shit up at this point, but I feel that while this album fits together better than any before, it also sounds more diverse." – Punknews

"This is a band that could write any type of punk under the sun, but consciously remains committed to keeping their footprint as raw and ephemeral as possible." - Punksite 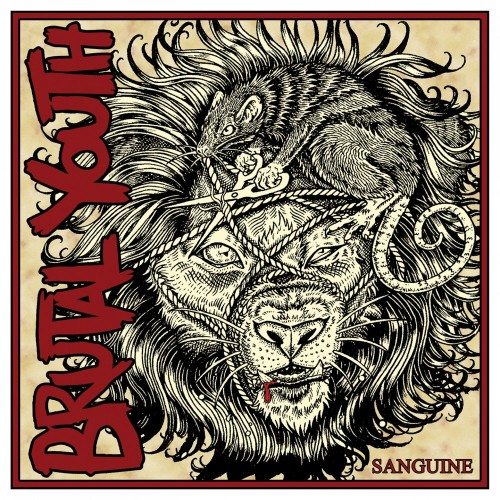